The long term goal of the international collaborative Physiome Project is to develop a computational modelling framework from proteins to whole organisms spanning across multiple spatial and temporal scales to facilitate the understanding of physiological function in healthy and diseased mammals. The current project will contribute to the advancement of the Lung Physiome component of this project.

While the Lung Physiome is currently not as advanced as the Heart Physiome it is no less important. This is due to the prominence of respiratory disease and the increasing morbidity and mortality from respiratory illnesses such as chronic obstructive pulmonary disease (COPD), which currently shares 4th and 5th place in the list of leading causes of death worldwide. All forms of respiratory disease ultimately result in an impairment of the primary function of the lung - gas exchange. This is normally a consequence of a reduction in matching between ventilation and perfusion (V/Q) within the lung.

The major physiological mechanism regulating V/Q is the effect of oxygen and carbon dioxide on pulmonary vascular tone. Current mathematical models of the lung used in clinical practise to evaluate patient status are simplistic and inadequate. Potentially these lung diseases could be investigated though computer simulation, allowing the efficacy of clinical treatment or drug therapy to be evaluated in silico using detailed mathematical models of the respiratory system. 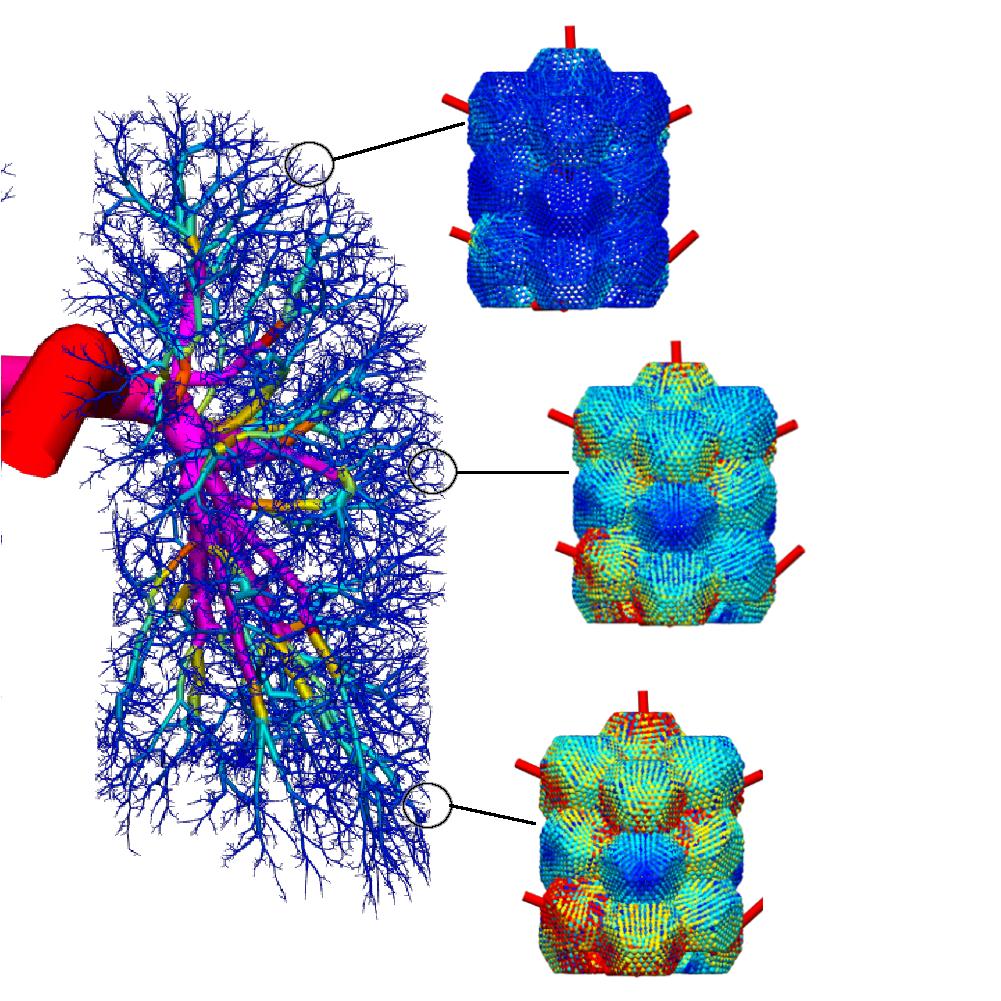 Flow predictions in the left side of the pulmonary arterial model (left side of figure). Right side of figure displays flow in the corresponding locations within the microcirculatorty flow model. For both solution spectrums: red equals maximal flow, dark blue is minimum flow

It is hoped that this research will ultimately contribute to increased efficiency, treatment methods, and diagnostic techniques in the clinical environment. While the development of specific clinical instruments is a fair way from fruition, the proposed research project will contribute to increasing our understanding of the functioning of the lung, leading to the formulation of new experimental hypotheses to test. The ultimate goal is to further develop an existing, realistic anatomically-based model of the pulmonary circulation by

(1) Developing an active tube model to represent the tension-length relationship in the vascular walls in response to external stimuli;

(2) Coupling the pulmonary blood flow model with a model of soft-tissue mechanics;

(3) Validating the model through comparisons with medical imaging data.

Potential applications for the completed model include investigation of the complex control mechanisms in the lung during hypoxia. During reduced oxygen conditions in the air, such as at high altitude or through lung disease, pulmonary vasoconstriction occurs. However, reduced oxygen in the blood - such as occurs during exercise - results in the converse mechanism, vasodilatation. The exact mechanisms responsible for these opposite responses are not fully understood. To increase our understanding, it is necessary to know how the partial pressures of oxygen and carbon dioxide differ in the pulmonary vascular walls for both situations in some considerable detail. There is no way of approaching this problem through measurement. However, solving the diffusional problem in an anatomically-realistic model with realistic regional gas and blood flow solutions will enable these variables to be calculated. This will also enable sensitivity analyses to highlight which factors are dominant.

This work will contribute toward the development of a computational framework that will combine emerging cellular knowledge with systems physiology to enable respiratory disease processes and the effects of therapeutic interventions, whether through drugs or mechanical means, to be modelled and examined in silico in the future. The objectives outlined in this proposal complement (rather than replicate) other international efforts within the Lung Physiome Project of modelling air flow, gas exchange, and parenchymal mechanics.