The Bright Club – http://brightclub.wordpress.com/about/ – is coming to Oxford! 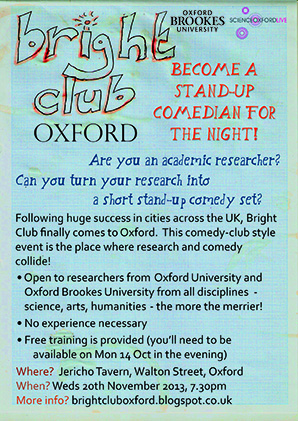 The Council has proposed to drastically reduce the 2014 EU education, research and innovation budget. In doing so, it goes back on the agreements made earlier in the summer with the European Commission and the Parliament.

If realised, the proposed cut of EUR 426 million to the “competitiveness” budget, which had already been pared down to the bare minimum, would effectively destroy the EU’s capacity to invest in knowledge, research and innovation.

The League of European Research Universities (LERU) is deeply concerned about the current 2013-2014 budgetary discussions and urges the Council to honour the commitments it made earlier this year. LERU also calls on all parties to engage in a constructive negotiation process to reach an acceptable outcome on the 2014 budget.
It is inconceivable that the EU would reduce even further its commitment to EU policies that promote growth and employment – a commitment which, although repeated often, is invariably the one to suffer first.

It is completely unacceptable that an agreed commitment should be opened up again for discussion after the enormous effort, time and energy that was spent to close the deal on the MFF (Multi-annual Financial Framework 2014-2020) and on Horizon 2020 (the EU’s framework programme for research and innovation 2014-2020) in the early summer.
Unless a satisfactory agreement is reached, the already compromised timetable to start the new Horizon 2020 programme at the beginning of 2014 would be irreparably damaged. This is not the time for change and delay!

LERU, which represents some of Europe’s strongest research universities, supports fully the important role of EU research policies and a robust budget to fund the best research from around Europe and beyond. The proposed cuts will endanger this vital objective.

LERU calls upon the Council to act with the necessary integrity and confidence, so that a sensible 2014 budget and a viable Horizon 2020 programme are delivered as soon as possible.