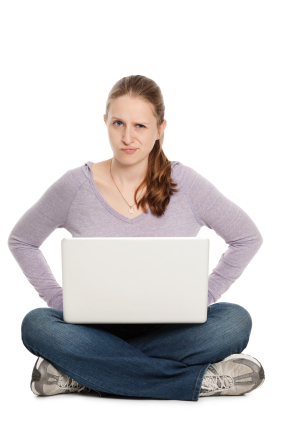 "Computers have intrigued me from an early age."

Almost every applicant could say this. Use the space to tell us something distinctive about yourself: be specific!

"I first became interested in computers when my family got a PC."

That's fine, but we're going to see a lot of applicants who've started in the same way. If your next phrase is something like "and I worked out how to write a program for a hangman game," that's great: it's something specific that you have done. But this statement on its own won't make you stand out from the crowd.

"Computers are increasingly important in the modern world."

As professional Computer Scientists, we are already aware of this! Tell us something specific about yourself instead.

"I have written my own web page by editing the HTML with Notepad."

Writing web pages is not the same thing as computer programming. Refusing to use editors that make it easier is a sign of pig-headedness, not intelligence. It's good to be curious about the way the World-Wide Web works, but a good computer scientist can know how something works without getting bogged down in the details.

"I am fascinated by Artificial Intelligence."

What is it about this topic that fascinates you? What advances in AI have been made over the past decade or two? Why can computers beat grand-masters at chess now, when they couldn't in the sixties? Are you ready to talk about these and similar things at interview?

"I know the whole of Java."

Really? You tempt us to ask questions about the parts of it we never really understood properly, just to see if you really understand them yourself. Computer Science is not about learning specific languages: it's about learning to think about computer programs and systems in a way that goes beyond the details of what language they're written in. Tell us what specifically you've done with your favourite language: it doesn't have to be earth-shatteringly original!

"I am familiar with programming in Visual Basic, C, C++, Java and Perl."

Don't give us a shopping list of languages that you've tinkered with: by the time you leave Oxford, you'll be able to pick up a new language and begin to use it productively in a single day. Tell us instead about the programs you have written. It's perfectly possible to write fascinating programs in the simplest of languages, such as the QuickBasic that comes with every copy of Windows. On the other hand, programs written in C or Java or Perl can be pretty boring if all they do is add up a column of numbers. Give us something interesting to talk about in the interview.