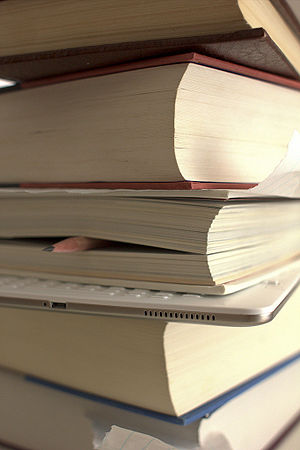 Books & e-book reader. Photo credit: Relly Butler For prospective undergraduate students, or those just wanting to learn a bit more about what Computer Science is really about, we encourage you to read any relevant materials that you find interesting. Some examples are provided below to get you started.

Your local library should be able to help with many of the books listed below:

Computer Science is a mathematical subject, and we are looking for students who enjoy mathematics as well as computing. Here is a selection of resources which may help you to develop your abilities in this area.

For a younger audience

These activities are a great way to start your first steps into Computer Science if you're 12 or younger.

Don't forget: programming goes far beyond creating web pages, so don't restrict your reading and practical experimentation to this one area.

The Department of Computer Science at Oxford hosts Open Days and events for school-age pupils. These are normally free of charge and range from five-day residential courses to one off Taster Days. Please note that due to the Covid-19 pandemic, all of outreach is currently remote in format.

If you're interested in applying to study Computer Science and Philosophy and want to find out a bit more about Philosophy, some suggested reading materials are given here.

The following are suggestions for summer reading once you've been offered a place on an Oxford undergraduate Computer Science course (including joint honours courses). You do not necessarily need to purchase these - your local library can probably help, and there will be copies available in your College library once you get to Oxford.

The first is more accessible but the second covers more areas relevant to the Oxford Computer Science degrees. These books are intended to be challenging so please don't worry if you find them difficult. Richard Bird's book is the set text for the Functional Programming course that you will take in your first term: during this course you will have the benefit of tutorials, lectures and practicals to help your understanding, not just the text book in isolation.

Although an A-level in Further Maths is not a requirement for studying Computer Science at Oxford, it is recommended. If you have only studied a single A-level in Maths, it would be helpful for you to do some preparatory work particularly focusing on discrete Maths and logical thinking, before coming up in October. Please see the free resources from the Oxford University Mathematical Institute