Women in Computing at Oxford, from the pioneers to now 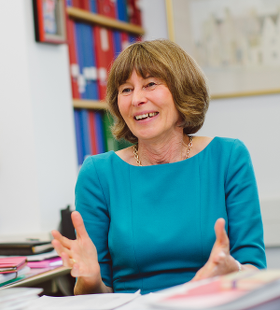 Walk into Professor Blanca Rodriguez's office and you'll see a striking image of the physiology of the heart. She's part of a long Oxford tradition of using computation to unravel complex systems: Dorothy Hodgkin, winner of the 1964 Nobel Prize for chemistry, was one of Oxford's computing pioneers, and her beautiful computer-drawn images of the structure of insulin now have pride of place in the Bodleian Library.

Campaigning by Dorothy and others led to the founding of the Oxford University Computing Laboratory in 1957, supporting research and teaching in numerical analysis, and a computing service. In the early days many women were employed as operators and programmers. In 1960 Joan Walsh was awarded the very first DPhil in the Computing Laboratory, and in 1970, as a Professor in Manchester, set up (with Linda Hayes and Shirley Lill), the group that became the highly successful software company NAG. Susan Hockey, later a Professor at University College London, was a pioneer of what is now called digital humanities, studying computer representation of non-Western languages.

The Masters programme in Computation started in 1979: then, as now, Oxford was an international melting pot, and Leonor Barocca recalls how, excluded from education in Portugal by political events, taking the course in 1982 shaped the rest of her life. Another overseas student recalled that, when she came top of the class in her undergraduate exams, entitling her to a scholarship to study in Europe, it was initially offered to the second placed (male) student. When she protested, funding was swiftly found for both of them!

Early students did pioneering work. MSc student Hanan Mohamed wrote an expert system for intricate Sudanese inheritance law. Mary Sheeran, now a Professor in Sweden, developed new programming languages for computer hardware in her DPhil, and was one of the first academics and college fellows hired to teach on the undergraduate Computer Science programme, launched in 1984.

A major benefactor of internet research in Oxford, Dame Stephanie Shirley, founded a highly successful software company which employed mostly women, but in general, the numbers of women in computing declined in the later twentieth century. It was not until 2007 that Oxford appointed a female Statutory Professor of Computer Science, Marta Kwiatkowska. Recently elected a Fellow of the ACM, Marta now acts as mentor and passionate advocate for OxWoCS, our energetic group supporting the next generation of women in computing. These days our department is home to eight female professors and many more women at other levels within the Faculty.