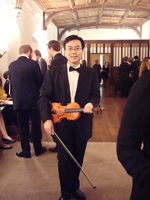 I was born in Taipei, Taiwan. I immigrated to Toronto, Canada with my parents since I was seventeen in year 2001, after graduating from the high school. My dad had been in a British shipping company, and my mom had been a high-school English teacher. Both of them have retired and lived in Toronto. I have one elder brother who studied his master and doctoral in international law in American University in Washington D.C., with the last year being a visiting scholar at Harvard Law School. He is currently an assistant professor at the law school of Chinese Culture University in Taipei.

From year 2001 to 2006, I studied my first degree in computer science, with specialized honour, at York University. During the last year of my study at York from 2005 - 2006, I was supervised by Professor Jonathan Ostroff and was involved as a research assistant in the project "Automated model-based verification of object-oriented code".

Graduated with Suma Cumlaude from York, I have continued my study as a DPhil student at the Oxford University Computing Laboratory (now Department of Computer Science) since Michaelmas 2006. Currently I am supervised by Professor Jim Davies and get involved in an on-going project called Booster, an object-oriented and declarative specification notation targeting for automatic generation of working system. My thesis is aimed at researching on the concurrent aspect of Booster and how an object source model can be transformed into a relational target one, with all intended semantics (association and behaviour) preserved. Furthermore, I also investigate on how the model consistency may be validated via a thorough data-flow analysis on methods, and how workflows composing patterns of Booster methods/transactions should be regulated, when they are executed in parallel.

Besides a passion of doing research and teaching. My favourite activities in Oxford have not been pub, but to attend classic music concert in both Hollywell Music Room and Sheldonian Theatre.

I have played violin for more than 15 years since my grade 3 in primary school. My aim has not been a professional player, but just as a way of relief and occasionally being entertaining in family party or some informal social occasions. I currently (Hilary 2008) join the String Orchestra of the University College. Records of my past performance are: