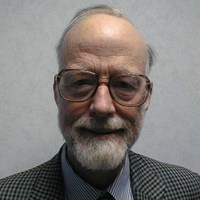 Tony Hoare's interest in computing was awakened in the early fifties, when he studied philosophy (together with Latin and Greek) at Oxford University, under the tutelage of John Lucas. He was fascinated by the power of mathematical logic as an explanation of the apparent certainty of mathematical truth. During his National Service (1956-1958), he studied Russian in the Royal Navy. Then he took a qualification in statistics (and incidentally) a course in programming (given by Leslie Fox). In 1959, as a graduate student at Moscow State University, he studied the machine translation of languages (together with probability theory, in the school of Kolmogorov). To assist in efficient look-up of words in a dictionary, he discovered the well-known sorting algorithm Quicksort.

On return to England in 1960, he worked as a programmer for Elliott Brothers, a small scientific computer manufacturer. He led a team (including his later wife Jill) in the design and delivery of the first commercial compiler for the programming language Algol 60. He attributes the success of the project to the use of Algol itself as the design language for the compiler, although the implementation used decimal machine code. Promoted to the rank of Chief Engineer, he then led a larger team on a disastrous project to implement an operating system. After managing a recovery from the failure, he moved as Chief Scientist to the computing research division, where he worked on the hardware and software architecture for future machines.

These machines were cancelled when the Company merged with its rivals, and in 1968 Tony took a chance to apply for the Professorship of Computing Science at the Queen's University, Belfast. His research goal was to understand why operating systems were so much more difficult than compilers, and to see if advances in programming theory and languages could help with the problems of concurrency. In spite of civil disturbances, he built up a strong teaching and research department, and published a series of papers on the use of assertions to prove correctness of computer programs. He knew that this was long term research, unlikely to achieve industrial application within the span of his academic career.

In 1977 he moved to Oxford University, and undertook to build up the Programming Research Group, founded by Christopher Strachey. With the aid of external funding from government initiatives, industrial collaborations, and charitable donations, Oxford now teaches a range of degree courses in Computer Science, including an external Master's degree for software engineers from industry. The research of his teams at Oxford pursued an ideal that takes provable correctness as the driving force for the accurate specification, design and development of computing systems, both critical and non-critical. Well-known results of the research include the Z specification language, and the CSP concurrent programming model. A recent personal research goal has been the unification of a diverse range of theories applying to different programming languages, paradigms, and implementation technologies.

Throughout more than thirty years as an academic, Tony has maintained strong contacts with industry, through consultancy, teaching, and collaborative research projects. He took a particular interest in the sustenance of legacy code, where assertions are now playing a vital role, not for his original purpose of program proof, but rather in instrumentation of code for testing purposes. On reaching retirement age at Oxford, he welcomed an opportunity to go back to industry as a senior researcher with Microsoft Research in Cambridge. He hopes to expand the opportunities for industrial application of good academic research, and to encourage academic researchers to continue the pursuit of deep and interesting questions in areas of long-term interest to the software industry and its customers.

In 1982, he was elected a Fellow of the Royal Society.