Oxford and Cambridge computer scientists forged many connections at the 3 rd Oxbridge Women in Computer Science Conference, held at the University of Cambridge’s Computer Laboratory on 10 March 2016. The annual conference, set up in 2014, aims to bring together junior and senior female computer scientists at Oxford and Cambridge to encourage collaboration through formal and informal discussion. It is co-organised by Oxford Women in Computer Science (OxWoCS) and Cambridge women@CL, and is now an annual event in both department’s calendars.

The conference began with a welcome talk by Cambridge’s head of Department Prof Andy Hopper. Then UCL’s Professor Ann Blandford presented the keynote talk entitled ‘Empowering people through computing’. It reflected on her education, impressive career and experience as a female computer scientist in addition to her current research.

The keynote was followed by two hours of student presentations in which students received personalised feedback from an assigned mentor in order to improve their presentation skills. The panel was impressed by the quality of work, with topics ranging from Social Network Analysis to Hierarchical Processor Aging Modelling.

During the coffee break, students presented their work in a poster session. Useful feedback was given by a panel of academics for each of the presenters. We then held our lightning talks session where students present their research in only 60 seconds to the audience which allowed a quick-fire introduction to a wide and diverse range of research topics.

The academic portion of the conference was closed by the sponsor Google. Dr Alyson Pitts gave a talk about her career path which led to her current role as a Speech Analyst at Google and current research interests entitled “A global approach to Speech Recognition”.

Awards were given for best presentation, best lightning talk and best young researcher:

The 4 th Oxbridge Women in Computer Science Conference will be held at the Oxford Department of Computer Science in March 2016 where OxWoCS looks forward to welcoming friends from Cambridge women@CL. 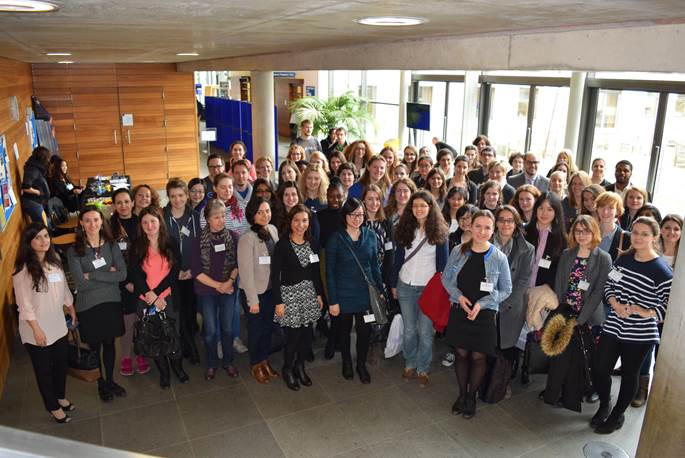