Nearly a million children die from pneumonia each year, making it a leading cause of death and the single most important health issue facing children under the age of five. The standard vaccination schedule calls for three doses of pneumonia vaccine given at six weeks, 10 weeks, and 14 weeks of age.  But administering the vaccine at such an early age also reduces how long the vaccine protects the child.

The new Research Connections film from Microsoft is entitled “Adjusting Childhood Pneumonia Vaccination Periods May Save Lives in Nepal.” It explores how the Oxford Vaccine Group is conducting a program in Nepal to determine if shifting the vaccination schedule can extend childhood immunity until the critical five-year point. For the trial, the team is scheduling the first two doses to be given at six weeks and 14 weeks, but the third dose is given much later, at eight months of age. The team is hopeful that delaying the final vaccination will protect children for much longer, thus reducing the mortality rate from this serious disease.

One of the biggest problems in medical informatics is keeping track of the data in such a trial. Researchers must meticulously log who collected each piece of information, how it was collected, and any associated details. Manually inputting this data takes time away from actual research and is prone to error, while incomplete entries may cause problems for other researchers who refer to the material later. That’s where the team from Oxford University’s Department of Computer Science come in: working on software support for medical informatics and finding ways to simplify the process and reduce the risk of errors.

With support from Microsoft Research, this team from the Department of Computer Science developed CancerGrid, a system to manage all the diverse data that are associated with a clinical trial. Each data item to be collected is associated with a clearly-defined semantic label so that the precise meaning will be clear to clinical staff, and researchers can be certain that any two trials that use the same semantic label for an item of data are recording exactly the same thing. This makes it possible to reuse and combine data, making each trial far more valuable to researchers. Windows Azure and Microsoft Excel, SharePoint and InfoPath are used to collect and organize the data, providing easy and intuitive access to data and implementing rules to ensure that critical data is recorded consistently and accurately. Forms, databases, and the associated infrastructure for each new trial can be generated at the touch of a button, permitting the deployment of trial support infrastructure in a fraction of the time and a fraction of the cost of conventional methods.

It is this flexibility and automation that made it possible for CancerGrid to meet the needs of the Oxford Vaccine Group, rapidly generating full document management support for the Nepalese pneumonia vaccine trial. By using a secure Internet connection, researchers in Nepal now transmit data back to the University of Oxford, where it can be analyzed and the effectiveness of the new vaccination regime assessed.

The full video, including interview clips with the Department's Jim Davies can bee seen at: http://research.microsoft.com/apps/video/default.aspx?id=154165 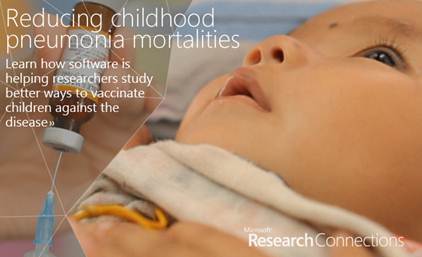