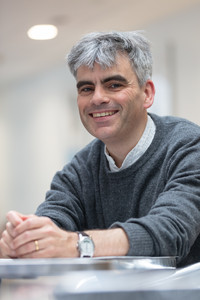 I am a mathematician. I studied mathematics at Queen Mary and Westfield College from 1987, and then came to the Mathematical Institute in Oxford to study for a DPhil. in 1990. My project concerned viscous flow, in particular the motion of a solid ball in a rotating container of treacle. While the partial differential equations that describe such motion are complicated, I was fortunate in finding some closed-form solutions to aspects of a simplified problem.

From 1994 to 1996 I was employed by the University of Bath to work on a large research project called Development of Modelling Tools for the Forging Industry. My role there included writing geometry transfer packages between the standard CAD format IGES, and various forging simulation packages. I also wrote a simulation package (TEUBA) from scratch, and was an active member of the geometric modelling group (g_mod) headed by Adrian Bowyer.

Since the beginning of 1997, I have been back in Oxford. I was initially employed as a research officer on the grant Manufacturing automation of large scale assemblies. This was to do with path-planning and scheduling for robot-arm manipulators. I worked in the Computing Laboratory (now Department of Computer Science) and I was supervised by Stephen Cameron

From October 1999 to June 2002 I was a Departmental Lecturer in the Computing Laboratory (now Department of Computer Science) .

From Summer 2002 to Summer 2006 I was employed by the Oxford Supercomputing Centre as Scientific Computing Advisor. This was initially a full-time role but from 2004 to 2006 I was jointly employed as a researcher on the Integrative Biology project.