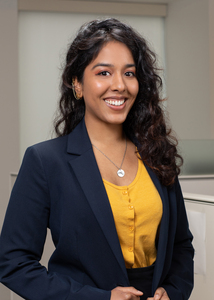 Anjuli is an analyst, writer, and researcher. Her PhD title is: Managing Risk to the Media from Emerging Networked Technologies. She is currently working as a 2021-2023 research fellow at Harvard’s Shorenstein Center on Media, Politics and Public Policy, while also pursuing a doctorate in Cyber Security at the University of Oxford.

Alongside her PhD and fellowship, Anjuli is currently the Communications and Engagement Coordinator for the HKS Misinformation Review. Since beginning her Harvard fellowship under the supervision of Prof. Matt Baum, Anjuli has also been part of the COVID States Project team, producing reports on the effects of regulation and messaging during the pandemic to help governments and individuals make informed decisions and allocate resources more effectively. Additionally, she is a Cyber PATH employee of the UK’s National Cyber Resilience Centres and a “Digital Sherlock” with the Atlantic Council’s Digital Forensics Lab.

Anjuli’s research centres on emerging threats to journalists from new internet-connected technologies. She is particularly interested in exploring these issues in democracies who are currently facing strains from outside influences and new legislation: Taiwan, Australia, the UK, and the US. She has presented her research via SPRITE+, IoTSF, Al Jazeera, The Conversation, and the New Statesman. Additionally, she was an intelligence analyst on Channel 4’s Hunted and Celebrity Hunted for six series (2017-2020) and is a “Digital Sherlock” with the Atlantic Council’s Digital Forensics Lab. Further, Anjuli has contributed to discussions on emerging security threats hosted by organisations including Harvard’s Belfer Center and Aqaba Process, the Leverhulme Research Centre for Forensic Science at the University of Dundee and Deakin University, and as an expert contributor to “We know what you did during lockdown”, a Financial Times Film by James Graham.

Inspired by her work as a research analyst at the Association for International Broadcasting, she is creating a toolkit for news organisations and journalists to improve the protection of journalists and sources against threats from the Internet of Things (IoT). Her research combines theoretical cyber security, law, computer science, international relations and security, and journalism training with policy-oriented practical solutions, developed through mixed methods. Anjuli’s pilot study investigated how some high-risk members of the media perceive and combat IoT threats to their work and wellbeing. The study found that most of the pilot study interviewees only had an abstract idea of IoT threats, thus highlighting the need for further research and resources. All interviewees said that their primary strategy for mitigation of IoT threats is simply to avoid interaction with IoT devices. However, 26 out of 34 surveyed cyber security experts said that they believed that it would be impossible for members of the general public to opt-out of interaction with the IoT within the next five years, which would render the primary strategy given by all journalist respondents completely redundant. As a result, Anjuli’s practitioner-focused toolkit includes the following:

(1) A conceptual model of IoT devices by environment (location), created via systematic literature review, intended to demonstrate to members of the media the scope and scale of the issue.

(2) A categorisation system of IoT threats to journalists, covering threats to information as well as secondary legal and physical threats, also created by literature review of currently feasible capabilities.

(3) Four case study profiles (of the US, the UK, Australia and Taiwan) to illustrate and evidence the reality of the IoT threat landscape in each country, with respect to other considerations with which the media must contend, ways in which IoT devices exist, are used and how their threats currently manifest.

(4) An interactive framework of countermeasures to the threats from both (2) and (3), to ensure that members of the media can effectively decide how to protect themselves. These countermeasures are linked to phases of the overarching editorial workflow, to ensure that their implementation is feasible and that they are clearly useful by/for specific role categories within the media.

Get in touch with Anjuli at anjuli.shere@cs.ox.ac.uk or via her LinkedIn. Anjuli is due to finish her DPhil in 2023, so if your organisation has a role for which she seems relevant, please reach out!

Anjuli also tweets on security of all kinds (and occasionally comic books). Follow her at @AnjuliRKShere!