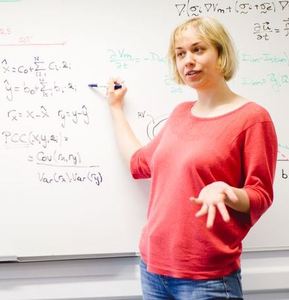 My DPhil (PhD) project is in the area of Computational Cardiac Electrophysiology, with a focus on understanding the causes of atrial fibrillation (AF). Specifically, my main aim has been to investigate the role of the nNOS protein in human atrial electrophysiology, via the use of computer modelling in synergy with experimental data provided by my experimental supervisor (Prof. Barbara Casadei, Cardiovascular Medicine, Oxford).

At the start of my PhD, experiments reported a decrease in nNOS levels in atrial muscle cells from patients with AF, and nNOS inhibition in control cells triggered a behaviour associated with AF. However, the underlying mechanisms linking nNOS effects and AF were unclear. My work has focused on conducting computer simulation studies to unravel mechanisms behind nNOS action in atrial muscle cells and whole atria in humans. This has been achieved in three stages.

First, I constructed an ensemble of models mimicking cellular variability in human atrial function under control conditions, to account for significant variability in experimental recordings exhibited by different cells. Second, I used this ensemble of control computer models to investigate the relative importance of nNOS-induced ionic currents in atrial cellular function. Third, I probed the role of nNOS in modulating regional gradients in atrial electrophysiology and their role in AF generation and maintenance by means of a human whole-atria model. The overall impact of my PhD has been to shed light on ionic mechanisms underlying nNOS-mediated effects and their relation to AF from the cellular to the whole atria human levels, via a unique combination of modelling and experimental information.

I have been awarded the EPSRC Doctoral Prize for a six-month research project following the completion of my PhD. During the EPSRC Doctoral Prize project, I will design and conduct in silico drug trials for atrial fibrillation. To capture patient-to-patient differences in heart function, I will construct an ensemble of human whole-atria models. The goal of this work will be to investigate the ability of in silico drug trials to explain, identify, and predict different outcomes of pharmacological therapies for AF. The project will involve collaborations with clinical and industrial institutions and is expected to have clinical and pharmaceutical applications. The simulations will be performed on Archer, UK’s national supercomputer.