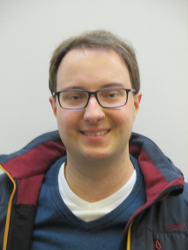 I am interested in the denotational semantics of programming languages, especially those for probabilistic programming and quantum computation.