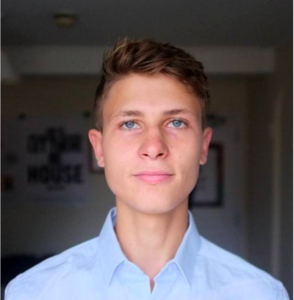 On the more applied side, I am also interested in how to build concrete implementations of these models, i.e. how do we compute the meaning of words in the first place? In increasing order of exoticism, possible answers include: database queries, neural networks and quantum circuits. Interestingly, all three can be modeled using monoidal categories equipped with bimonoids, hence they are all suited to reasoning with string diagrams...

I did my undergrad in Computer Science here in the department, where I focused mainly on logic, language and game theory for artificial intelligence. I wrote my bachelor dissertation on temporal logic for computing Nash equilibria in multi-agent systems, supervised by Julian Gutierrez. I graduated from the MFOCS (mathematics and foundations of computer science) MSc in 2018, with a thesis on "Categorical Compositional Distributional Questions, Answers & Discourse Analysis", supervised by Bob Coecke.

In between I also worked as a data scientist for IRHT (Institut de Recherche et d'Histoire des Textes) in Paris, where I trained deep neural networks to analyse textual correlations between medieval manuscripts. The focus of the project wasn't so much on the deep learning models per se, as on the integration of convolutional neural networks in a richer semantic structure. I built a Semantic Web pipeline integrating text, image and their historical metadata; with the aim of reconstructing the causal structure of who copied what on whom in the Middle Ages.