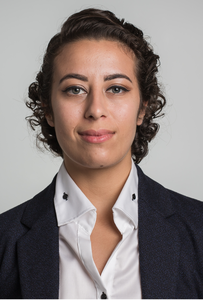 Arianna was recently awarded the Best Poster Prize as one of seventeen research snapshot presenters during the 2021 SPRITE+ showcase.

Arianna Schuler Scott is a DPhil candidate supervised by Professor Michael Goldsmith, working in the Cyber Analytics Group under Professor Sadie Creese. Arianna's research problem lies within current data-protection discourse. Researchers must ask members of the public for their informed consent before they can take part in a study. Here, the burden of communication (i.e. of informing) falls on researchers to communicate clearly and concisely instead of on participants to understand dense academic language. Unfortunately, people rarely understand what they is being asked of them - Arianna's work indicates that there is research value in taking time to communicate with participants in a way they understand. Clear and accessible communication around data-use leads to richer data-collection in a long-term, online medical study; response rates are higher overall, and participant retention is observed where a drop-off is expected. This work is being done in collaboration with RUDY, a rare disease study promoting better clinical care for their participants through patient driven research.

Based at the Centre for Doctoral Training in Cyber Security which is hosted in the Department of Computer Science, Arianna's work is co-supervised by Dr Harriet Teare, Research Leader at RAND Europe and previously affiliated with the Centre for Health, Law and Emerging Technology. Dr Helena Webb, whose focus lies with Human Centred Computing, co-supervises this project. This research is generously funded by the EPSRC.

Before coming to Oxford, Arianna organised and took part in hackathons in the UK and USA and worked as a software developer specialising in quality assurance. Since joining the University, Arianna has contributed to a more academic hackathon scene. She has also developed and delivered interdisciplinary cybersecurity workshops and events, such as the UK's first cyber-policy competition, and "Cybersecurity in Context", a short module for her Centre for Doctoral Training's first-year syllabus. Arianna has taught for the Computer Security, Computers in Society and Computer Networks modules offered by the Department of Computer Science, and interviewed candidates for admission on behalf of University College.