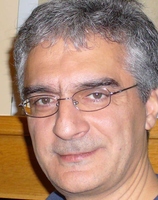 My profile in Google Scholar and DBLP.

Elias Koutsoupias is a professor of computer science at the University of Oxford. His research interests include algorithmic aspects of game theory, economics and networks, online algorithms, decision-making under uncertainty, design and analysis of algorithms, computational complexity. He received the Gödel Prize of theoretical computer science in 2012 for his work on the price of anarchy, in reference to laying the foundations of algorithmic game theory. He is also the recipient of the ERC Advanced Grant “Algorithms, Games, Mechanisms, and the Price of Anarchy”.