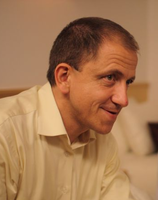 Peter studied Medicine and Biophysics at the Moscow Pirogov Institute (1981-1987) and, after post-graduate training and research at the Berlin Charité (PhD 1990, Facharzt 1991), he joined the Cardiac Electrophysiology Chair of Professor Denis Noble at Oxford (1992). In 1998, Peter set up the Oxford Cardiac Mechano-Electric Feedback lab, initially as a Royal Society Research Fellow, and subsequently as a Senior Fellow of the British Heart Foundation. While at Oxford, he held a Research Fellowship at Keble College (2002-2004) and was the Tutorial Fellow in Biomedical Sciences at Balliol (2004-2010). Since 2010, he is also an Affiliated Senior Fellow of the Oxford Computing Laboratory.

Peter’s team enjoys a strong international reputation in cardiac mechano-electrical interaction studies, in particular as a result of their ability to cross traditional boundaries between fields (engineering, biophysics, biology, computing) and levels (ion channel to whole organ) of investigation. Building on a solid track-record in the development and application of novel techniques, they combine experiment and computation to integrate cardiac structure-function data to address clinically-relevant research targets. The group maintains close links with leading experimental and modelling teams in the UK and elsewhere, including Auckland, Baltimore, Boulder, Ekaterinburg, Heidelberg and Okayama.

Peter directs a significant portfolio of externally-funded research, and has been a driver of international collaboration actions, such as the Network of Excellence for the EU Virtual Physiological Human Initiative whose founding director he was. He serves on editorial boards and as a reviewer for international journals and funding bodies. Peter is the coordinating editor of the primary textbook on Cardiac Mechano-Electric Coupling and Arrhythmias, and chairman of the leading international workshop series on the same topic.

Kohl P, Hunter PJ & Winslow RL. Model interactions: 'It is the simple, which is so difficult'. Progress in Biophysics and Molecular Biology 2011/107:1-3. (PBMB)