The focus of SUAAVE lies in the creation and control of swarms of helicopter UAVs (unmanned aerial vehicles) that are individually autonomous (i.e not under the direct realtime control of a human) but that collaboratively self-organise: to sense the environment in the most efficient way possible; to respond to node failures; and to report their findings to a base station on the ground.

Such clouds (or swarms or flocks) of helicopters have a wide variety of applications in both civil and military domains since they are rapidly deployable and highly survivable. In effect there are three separate capabilities for use in addressing application-specific problems: (i) ground sensing of various types; (ii) atmospheric sampling; and (iii) the ability to bridge communications, all within a rapidly deployable, survivable, hands-off package. Examples of these include: search and rescue; pollution monitoring; chemical/biological/radiological weapons plume monitoring; disaster recovery - e.g. (flood) damage assessment; sniper location; communication bridging in ad hoc situations; and overflight of sensor fields for the purposes of collecting data.

The novelty of these mobile sensor systems is that their movement is controlled by fully autonomous tasking algorithms with two important objectives: first, to increase sensing coverage to rapidly identify targets; and, second, to maintain network connectivity to enable real-time communication between UAVs and ground-based crews. The project has four main scientific themes: (i) wireless networking as applied in a controllable free-space transmission environment with three free directions in which UAVs can move; (ii) control theory as applied to aerial vehicles, with the intention of creating truly autonomous agents that can be tasked but do not need a man-in-the-loop control in real time to operate and communicate; (iii) artificial intelligence and optimisation theory as applied to a real search problem; (iv) data fusion from multiple, possibly heterogeneous airborne sensors as applied to construct and present accurate information to situation commanders. When trying to determine the location of an object of interest, it is necessary to account for the partial information obtained from noisy measurements. Probability models can be derived to account for this uncertainty and consequently be used as input in the search strategy.

Here are the videos taken from our UAV during some fields experiments. They have been used to assess how altitude affects the detection of a target.

The presence of multiple agents can also be exploited with the implementation information sharing mechanisms.

In a network where each node acts in a self-interested manner, connectivity occurs opportunistically. However, by sharing information regularly nodes take into account more global information and are thus able to make more optimal control decisions. Essentially, it's a trade-off between sensing coverage and quality. The objective being to find and implement distributed methods of evaluating and preserving connectivity within a mobile sensor network. Our interest is to measure how this connectivity affects the performance of cooperative exploration by a team of autonomous UAVs. 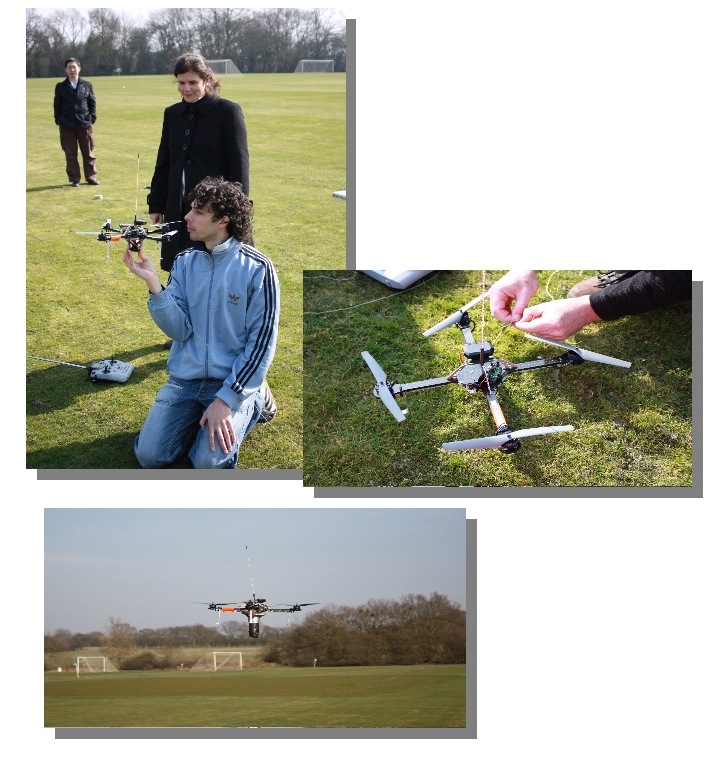