The Computer Science Graduate Society (CoGS) was founded in 2009 with the aim of providing a platform for the academic and social life of post-graduates in the department. We cover both student representation on several departmental and divisional committees as well as organization of a variety of social events. The latter provide an excellent opportunity for MSc students, DPhil students and post docs to mingle and catch up outside their research groups.

We run a large number of events to have something for everyone's taste. We kick off every term with a Pizza & Wine night, for newbies to have great start and everyone else to catch up after the holidays. Our annual dinner as part of the department's student conference in Trinity term is usually held in one of the colleges and gives a nice finish to a productive day. The weekly Wednesday Coffee & Cake runs throughout term and vacation time to make sure you get your mid-week caffeine and sugar fix. Other social events happen at irregular intervals throughout the term, examples include Geek Nights, pub trips, or board games nights. Last, but by no means least, we traditionally run our Summer BBQ in late July/August to celebrate the summer break and the sun with a delicious burger and a cold beer in the University Parks.

The members of the CoGS committee are also student representatives on the Joint Consultative Committee for Graduates (JCCG), which meets once per term. If you have any issues or concerns that you would like to be brought up in a JCCG meeting, please contact any of the people listed below. The CoGS president also attends various other committee meetings in the department as a graduate student representative, and represents the Computer Science department in meetings of MPLS division student reps.

Also, if you enjoy our events, why not give us a hand with one? Simply drop us an email with the one you like. 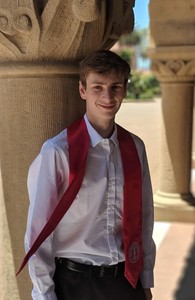 From McKenzie River, Oregon, Jaclyn received her BS in Computer Science and Biology, followed by an MS in Bioinformatics. She then worked on a platform for federated biological data management and analysis at Oregon Health and Science University. After which she helped build up a small company, Omics Data Automation, focusing on distributed genomic and clinical data aggregation for precision medicine applications. She is now at Oxford to explore query optimization within a declarative data integration solution for biology. Aside from that, Jaclyn enjoys rivers, good beer, and drawing.

Temitope was born in southern Nigeria. He moved to Italy at the age of 7, where he spent most of his life before enrolling into Oxford in 2014. He holds a bachelor in mathematics from the University of Pavia and an MSc in Mathematics and Foundations of Computer Science from the University of Oxford. Temitope is now a member of Wolfson College and a DPhil candidate in the department of computer science, where he researches computational logic and its applications in semantic web technologies and artificial intelligence. When he is not doing science, he is busy writing and enjoys creating both essays and short stories, a recent passions of his.

Anuj is pursuing a DPhil in Machine Learning. His research interests include deep learning, reinforcement learning and optimization. He holds B.Tech and M.Tech degrees in Computer Science, during which he worked on various problems in probabilistic graphical models. Before joining Oxford, Anuj worked as a researcher in machine learning and data analytics. Anuj enjoys hiking and table tennis. He is also math savvy and likes solving puzzles and reading sci-fi in his free time.

Nitin started at Oxford as a Masters’s student in Computer Science. He stayed on to continue his DPhil with Prof Sir Nigel Shadbolt and his group. Nitin holds a B.Tech degree in Information Technology & Mathematical Innovations during which his research was centered around expert system and high performance computing. More recently he has been involved with data driven intelligent systems focussing on digital wellbeing. He’s enthusiastic about pervasive & affective computing and cognitive processes. When procrastinating work, he enjoys travelling, binge watching Netflix & reading law.

My background is in theoretical physics, which I studied at Imperial College. I have keen interest in Quantum Computing. This brought me to start my PhD in theoretical physics at ETH Zurich last year, where I focused on problems related to Quantum Simulation. The scope of my project was unfortunately driven heavily towards ‘less-conceptual’ work which did not fit me very well and ended up being a strong enough reason to re-start my DPhil at Oxford this year.
Under the guidance of Dr. J. Barrett, I am focusing on foundational concepts in Quantum Theory and (Quantum) Computing, having strong interest in Foundations, Topological Quantum and Quantum Information in general.

DPhil Representative from the CDT in Cyber Security

Matt comes from a town close to Manchester, England, which is arguably the best bit of the UK. He studied for an undergraduate masters degree in Computer Science at Warwick before starting in the Centre for Doctoral Training in Cyber Security. He is in his second year, which confusingly means he is a first year DPhil student. Outside of work, Matt enjoys sport (can talk about cycling for hours), photography and music.

You can generally find Ahmet at night, where if he is not working on his machine he is probably working on another one. Originally from Istanbul, Ahmet holds a degree in Computer Engineering and is a decent game programmer. Prior to Oxford he was working in ETH Zurich, and is now currently reading in the security group of Professor Andrew Martin. He is an organism that turns caffeine and pizza into software.

Alina is from beautiful St. Petersburg, where she did her BA in Computational Linguistics. After quite some travelling and quite some studying in and around Europe, she earned her masters degree in Computational Logic and has now moved to Oxford to do a DPhil in Knowledge Representation. Alina loves learning foreign languages, good wine and city cycling. She is a huge fan of online education and will be happy to discuss what AI and ML might bring next - especially if you have some chocolate for her!

Prince Abudu is an unabashed optimist and highly motivated youth leader who has an amazing commitment to excellence, along with firm determination to achieve greatness for the greater good. Prince graduated summa cum laude with a Bachelor of Science degree in Computer Science and as highest ranking scholar in the Department of Computer Science at Morehouse College, in Atlanta, Georgia, USA. Prince continues his education, as one of the two 2016 Rhodes Scholars selected from Zimbabwe. Prince's research interests are in the area of Sensor Networks and Embedded Systems focusing on the implementation of Machine Learning techniques in constrained environments. Prince is also Co-Founder and Chief Operating Officer for Emergination Africa (www.emerginationafrica.org), an intercontinental youth-driven mentorship program operating in the US and in Zimbabwe.

Yuan is originally from Guangzhou, a fascinating city in the southern part of China. She is pursuing a DPhil (Oxford PhD) in Probabilistic Programming. Her research interests include probabilistic machine learning and the automation of related methods. Yuan loves making friends with people and learning different cultures and customs. She also enjoys playing the piano, doing some sports like tennis and badminton, and discovering various of delicious foods!